Tiki-Taka- Is it Dead or Just Evolved? | Football Tactics

Tiki-Taka- Is it Dead or Just Evolved? | Football Tactics
The man who made tiki-taka almost perfect, Pep Guardiola, revolutionized football and led Barcelona to 14 out of a possible 19 trophies between 2008 and 2012.
The Spanish national team were World and European champions at the same time by bolstering the tiki-taka style, but in the last five years it seems that tiki-taka is beginning to fade. Since Guardiola left Barcelona in 2012, Real Madrid have won three European titles in the last four years, while the Spanish national team lost both their crowns.
Subscribe- goo.gl/868BwZ
Follow Us Online!
Twitter- footballnotes01
Facebook- footballnotes01/
Instagram- footballnotes
So, is tiki-taka dead in 2017, or has it just evolved?
First, let's discuss the basis of the tiki-taka style.
Barcelona’s tiki-taka was based on the passing and positioning excellence of midfielders Andres Iniesta and Xavi. During Guardiola's time at the helm, Barcelona's players were constantly playing in triangles during the buildup, allowing them to always have a teammate free to receive a short pass. Passing the ball around quickly and directly cut errors to a minimum, and it was almost impossible for them to lose possession. On the rare occasions it happened, Barcelona were quick to press the opposition with all available players to regain possession.
In defense, Guardiola often used a midfielder to maximize the passing potential of the squad. His defensive line was always very high up the field, and he installed a sweeper-keeper into his team. Victor Valdes was expected to take part in the buildup phase and sweep every dangerous long ball, even outside his penalty area. This tactic denied space to opponents behind the defense, and allowed Lionel Messi to flourish in the final third of the pitch.
However, after Xavi departed and Barcelona struggled to find a midfield partner for the aging Iniesta, the Catalans had to modify their playing style. Instead of comfortably passing back and forward in the middle of the field, they adopted a more direct approach. After forming the attacking trio of Messi, Luis Suarez and Neymar, Barcelona moved the ball to the final third of the field much faster. That caused passing accuracy and possession to drop, but they kept the goal machine running, thanks to the excellence of their amazing attacking trident.
Pep Guardiola struggled to implement the tiki-taka style to Bayern Munich completely. He had his sweeper keeper in Manuel Neuer, Javi Martinez, the midfielder who fit into the defensive line perfectly, they executed high-pressing flawlessly, but the attack was very different from Barcelona’s. Robert Lewandowski is a classic striker, complemented by Frank Ribery and Arjen Robben as wingers. While he was at Barcelona, Guardiola urged his players to roam freely in the last quarter to create gaps in the opposing defense, which would eventually lead to goals. At Bayern, Guardiola instructed his players to find Lewandowski in the penalty area and feed the Polish striker with assists. That tactic was fruitful in the Bundesliga - Bayern won back-to-back titles - but he failed to win European silverware for the club, which was the top priority in Munich.
In 2017, we can find elements of tiki-taka in unexpected places. Apart from Guardiola's Manchester City, who clearly have some elements of tiki-taka installed in their playing style, Tottenham Hotspur and Napoli are two other clubs which took the most elements out of the famous Barcelona concept.
Barcelona's glory tiki-taka years with Guardiola have passed. The style which made Barcelona and the Spanish national team one of the best in the history of football had to be modified, because the players who were exceptional in that style of play retired, or were at the end of their illustrious careers.
However, that doesn't mean that tiki-taka is dead. Almost every La Liga club was influenced by tiki-taka, and some of the ideas implemented by Guardiola are currently being executed across the continent.
The golden generation led by Iniesta and Xavi is no more, but their influence permanently changed football as a game.
What do you think?
Music: freemusicarchive.org/
Link-freemusicarchive.org/music/Alex_Vaan/Beaches/Alex_Vaan_-_01_-_Beaches_1589
Keywords-
Tiki Taka Barca
Tiki Taka Goals
Tiki Taka Tactics
Tiki Taka Barcelona
FCB
Barca
Pep Guardiola
La Liga
EPL
BPL
PL
Premier League
FC barcelona
Tiki-taka
Xavi
Iniesta
Xavi assists
Iniesta skills
xavi iniesta messi
xavi iniesta messi tiki taka 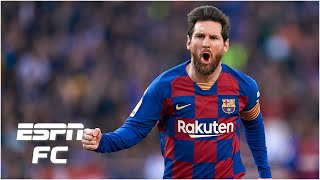 Lionel Messi scores FOUR for Barcelona: Is that good or bad for Barca? | La Liga

When Lionel Messi Showed Who Was The Best With No Goals